skip to main | skip to sidebar

Allamah Basheer al-Deen Usmani Qinnawji [r.h] has brought forward many statements of ulama in his Tafheem al-Masail regarding istighatha with the belief of hadhir nadhir. Fatwa of Shaykh Hamid al-Deen Nagori [r.h] was posted earlier.

1. He also mentions a fatwa of Mullah Hussain Khabaaz [r.h]:

"To call upon the dead with the belief that they are hadhir[listening to us] by uttering statements like Ya Rasool Allah and Ya Abdul Qadir etc are kufr."

So the book which our deobandi friend read was Jawahir al Tauheed. The author of this book is Shaykh Ghulamullah Khan , who is from the mamati sect of deobandi. They consider prophet to be dead and do not belief life in grave for prophet ( sal allahu alayhi wa sallam).

Shaykh Ghulamullah Khan writes that he took the reference from the book Tafheem al masail. This book was written by the wahabi scholar Shaykh Basheerud deen qannawji .

So we have seen that as per our deobandi friend the original source of the quote was a book called Miftah al quloob. Though he could not provide the author of this book. 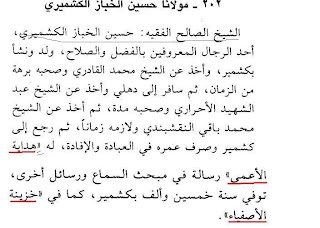 What a challenge by mr. takfiri! He is under the delusion that since he has no idea how great this allamah is, then no body else does. His posts are full of errors. I am sure he will feel like a fool, that he is, after seeing the scans below.

Mullah Hussain Khabaaz [r.h] is mentioned on 523-524 of Nuzhat al-Khawatir. He is referred to as al-Shaykh, al-Salih, al-Faqih by Allamah Abdul Hay Lukhnawi al-Hussaini [r.h].

He was from Kashmir and he travelled to Dehli and there he benefitted from Abd ash-Shahid al-Ahrari [r.h] for a long period of time. After that he returned to Kashmir and passed away in 1050 hijri.

The quote is in his book Hidayat al-A'ma which is in manuscript form in 288 folios in Indian Kashmir”.


So now our deobandi friend said that the quote is present in a book called Hidayatul Al A’ma which was written by Mulla Hussain Khabbaz and the manuscript of this is kept in Kashmir.


Let us now try to investigate the truth of this matter.

1.The original source which our deobandi friend could quote through secondary reference is that of wahabi scholar Basheeruddin qannawji in his book Tafheem al masail.

2.Later our friend says that this quote is present in Hidayatul Al Ama.

Our deobandi friend is wrong.

1.Shaykh Baheeruddin qannawji was a student of wahabi king pin of India , Nazeer Hussain Dehalvee and he was the first person who gave this reference in his book Fatwa e Naziriya.

See the scan followed by translation 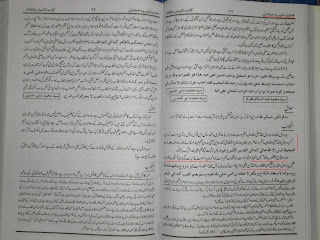 Question : Is it permissible to say Ya Rasul Allah at any other place except near the grave of prophet?

Answer : To utter this word “Ya Rasul Allah “is calling prophet, and only he who is hadhir ( physically present) is called, so the belief of this person is that prophet is present every where and this is not possible except by all encompassing knowledge [Ilm Muhit] and this all encompassing knowledge [Ilm Muhit] is a especiality of Allah and to affirm this type of knowledge for any one else is shirk.
Mulla Hussain Khabbaz has written in his book Miftah Al Quloob that to call those dead who are not physically present [Amwaat Ghaybaat] with the belief that they are physically present [ Hadhir],like saying Ya Rasul Allah and Ya Shaykh Abd Al Qadir Gilani etc is kufr . That is why it is written in the books of fiqh that if a man marries with Allah and messenger [ rasul] as witness ,then that marriage will not be valid ( will not take place) and the person who goes for this type of marriage will become a kafir because this man has a belief that prophet is aware of the knowledge of the unseen ( Ilm Ghayb) [ Bahr Ar Raiq]…..


During those days when this was printed , at that time itself it was asked by sunnis who is this Mulla Khabbaz and Nazeer Hussain did not give any sufficient reply.

2. Basheeruddin Qannawji took this quote from his teachers books and he also failed to provide any information about Mulla Hussain Khabbaz. Instead of quoting his teacher , he directly mentions the original source![ Miftah Al Quloob]

3. What our deobandi friend did was he found out a scholar wuth the name Mulla Hussain al Khabbaz al Kashmiri and then found out which book is written by this scholar and he smartly said that this quote is present in that book whose manuscript is in Kashmir! Where as this quote is present in Miftah Al Quloob as per two wahabi scholars from whose book our deobandi friend took his reference.

4. This Mawlana Hussain Al khabbaz is mentioned by Shaykh Abdul Hayy al Hasani ( not Husseni as our deobandi friend has mentioned) in his biographical work Nuzhatul Khawatir as a Naqshbandi sufi who wrote a book called Hidayatul Al Amma.

Indeed this Mulla Hussain Al Khabbaz al Kashmiri did write a book called Hidayatul Al Amma which is preserved in Srinagar in manuscript form in 287 folios [Persian]. This work was does not contain any such quote and no one ever gave this reference. It deals with Naqshbandi sufi teachings.

Please note both the wahabi scholars ( Nazeer Hussain and his student qannawji) have cited Miftah Al Quloob to be the source of this quote.


Also note that Shaykh Abdul Hayy does not mention any other book by this Mulla Hussain Al Khabbaz Al kashmiri except Hidayatul al Ama.

The fact is Mulla Hussain Al Khabbaz wrote other book also on Naqshbandi sufi teaching. The name of the book is hasht Sharait [ Eight conditions]. In this Persian work Mulla Hussain al Khabbaz Al Kashmiri has given eight condtions for a disciple to progress in the path of Tasawwuf. 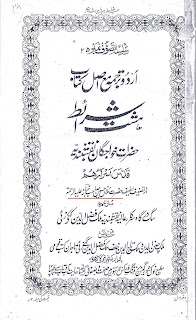 Since Shaykh Abdul Hayy al Hasani has mentioned only one book by this scholar , our deobandi friend ASSUMED that this quote MUST be present in this book !

By giving this reference he contradicted himself because earlier he said this quote is present in Miftah Al Quloob ! But he did not know who wrote this book!


Please note this Mulla Hussain Al Khabbaz al Kashmiri is the same person who introduced Imam Rabbani [rd] to Baqi Billah [rd] as mentioned by Imam Rabbani in his maktoob and also written by other scholars and historians.

There is a perian work named Miftah Al Quloob whose manuscript is in US [ details missing,author un known] and this work dealing with central asian kings like Mahmud Sultan, Qasim Sultan, Sultan Ahmad Mirza, 'Abd al-Rahman Tarkhan, and Imam Qali Khan. Some of the place mentioned in this work is Samarqand, Qal'at Arquq, and Qal'at Haji Tarkhan

Readers can see that how our deobandi friend had to self contradict himself in order to keep his wrong view upright!.

So that particular point remains null and void while discussing this issue,no matter who wrote this and in which book.

Also there is another scholar with the name Ahmed bin Hussain Al Khabbaz who lived some where in 7th islamic century. No more details could be traced and it is not required here since the issue is clear now.


May Allah protect all the scholars of Ahlus sunnah wal jamah who are the true inheritors of our prophet [ sal allahu alauhi wa sallam] and who are working hard to help this ummah to remain on the true path. Ameen

Sabri...
I would like to speak with you if possible please email me at s_sabir1@hotmail.com